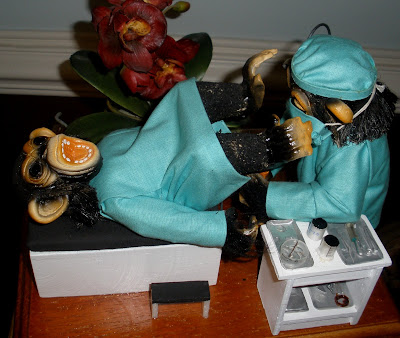 Last night we attended a post-Christmas, Get Even With Santa, party where I knew no one. It turned out to be a blast. Kathy and Dave are fabulous hosts; fun, food, drink, gifts; they had it all. I was lucky enough to pick the number 2 for gift picking and I was even more lucky to have picked the above, apparently a gift that has been seen at Kathy and Dave's annual party for the last several years. Of course I was the only person there who wanted to keep it. When I say keep it I mean I'll not be taking to the party next year either. In case it's hard to tell, it's plastic monkeys, one having a baby the other the doctor mounted on a wood piece with plastic doctor's equipment. There's even a baby that's coming out. Need I say more? It's sooooo me. 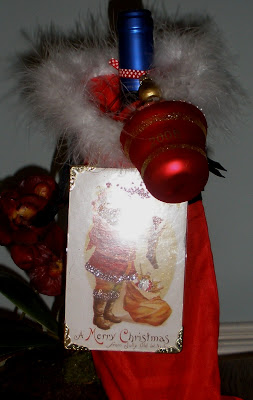 When the openings were over, some 50, the number 1, 2, and 3 people get to decided whether or not to keep their gifts or trade with any others. I stuck with my monkeys. Then they did something I've never done before and voted on who was the best sport about what they got "stuck" with as a gift. I got the most votes so I got the additional gift above. Nice red bag, nice 2008 ornament, and nice repro framed vintage card. Inside: 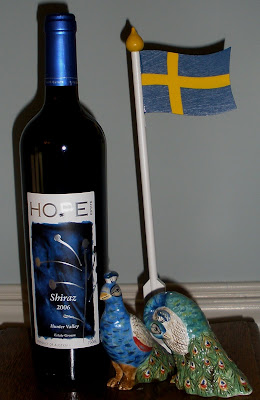 A bottle of Hope. I guess if I drank it all I'd feel hope but when it wore off, since it turned out to be wine and I can't drink wine, I feel well...not at all hopeful. Still a very cool bottle and a totally cool monkey...umm...still don't have a good noun for it...thing. Don't even think about making an offer, it's priceless.
Posted by Doojies at 11:30 AM

Tina(Taken over by her daughter, Nicole) said...

ohmygosh..what a funny gift and YOU are going to keep it..that figures..lol..Glad we got to see the REAL you ;)

Oh course you would keep that. It is so you...The bottle oh 'hope' is why I responded to this post. To remind you of me! Hope things are well. Blessings both large & small.
XO~Hope

Oh mercy me... forget that red retro phone I want the screaming pregger monkey and Doctor Mokie pulling the baby monk out of the who who area! This is definitely a throw you under the bus and back up over you piece! You're so lucky!

I know, right? She said I'm going to have to come up with something REALLY special for next year as this has been a fave for the last five or more years. I just know that great place in Omaha will have the perfect thing.

I LOVE the monkeys! Of course you want to keep that. I am so behind in your blog!