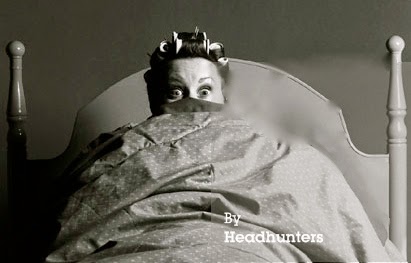 I've been in denial since last week when I tried to change the background on my SEVEN YEAR OLD BLOG. I had felt inspired to make a written post for several weeks but hadn't gotten around to it. So, when I went on my blog for the first time in a long time, I thought it was time to update my blog background THEN I would make my post. Well, in trying to update the background, I did something that deleted ALL my photo from SEVEN YEARS!!! I tried a couple of thing to no avail so I left...for over a week. I did put some crucial photos back on but left it at that. How long do you think it's going to be for me to upload seven years worth of photos again? Some I may not even have any longer. Can you say "back up"? Oy. I'll be backing up and installing my time machine on my laptop so I can go back. I shall proceed then slowly go back and replace photos. Please be patient and back up everything.
Posted by Doojies at 1:14 PM 1 comment:

Okay so I finished Matt's room after my last trip to Texas and I thought I'd better post before my next trip to Texas which is soon.
Matt and I are happy with the outcome. As I'd said before, he wanted the same as he'd had in his very small room (now my very small work room), the sleek, NYC look. We did a lot of recycling of furniture. The iron bed, above, was mine growing up and the dresser belonged to his grandparents. He has his framed prints of NYC buildings and...
...his big Ikea framed print of vintage NYC. That's my daddy's office chair and one of the new pieces we bought online (if you read the previous post, it's one that took us forever to put every last piece together).
The nice, new charcoal gray carpet along with another piece of online furniture we put together for the new t.v. Matt got for Christmas. Finally all the gaming can go on in his room and that's why there's carpet only in that room-acoustics- all the sound (or at least more of it) stays in the room. Oh, in case you notice the number on the door...sometimes I forget...many years ago I put numbers on all of the rooms upstairs like a hotel. Now he's number 2-ha-his brothers have been there too.
In case you've forgotten, this is what this room looked like during the progress; extra unkempt because all of the guest bedroom stuff had to be stored in here while I was working on my work room. I love a finished project. I've pretty much finished my new work room but it's so much smaller that I haven't completely organized it yet. I'll post when I get around to that. 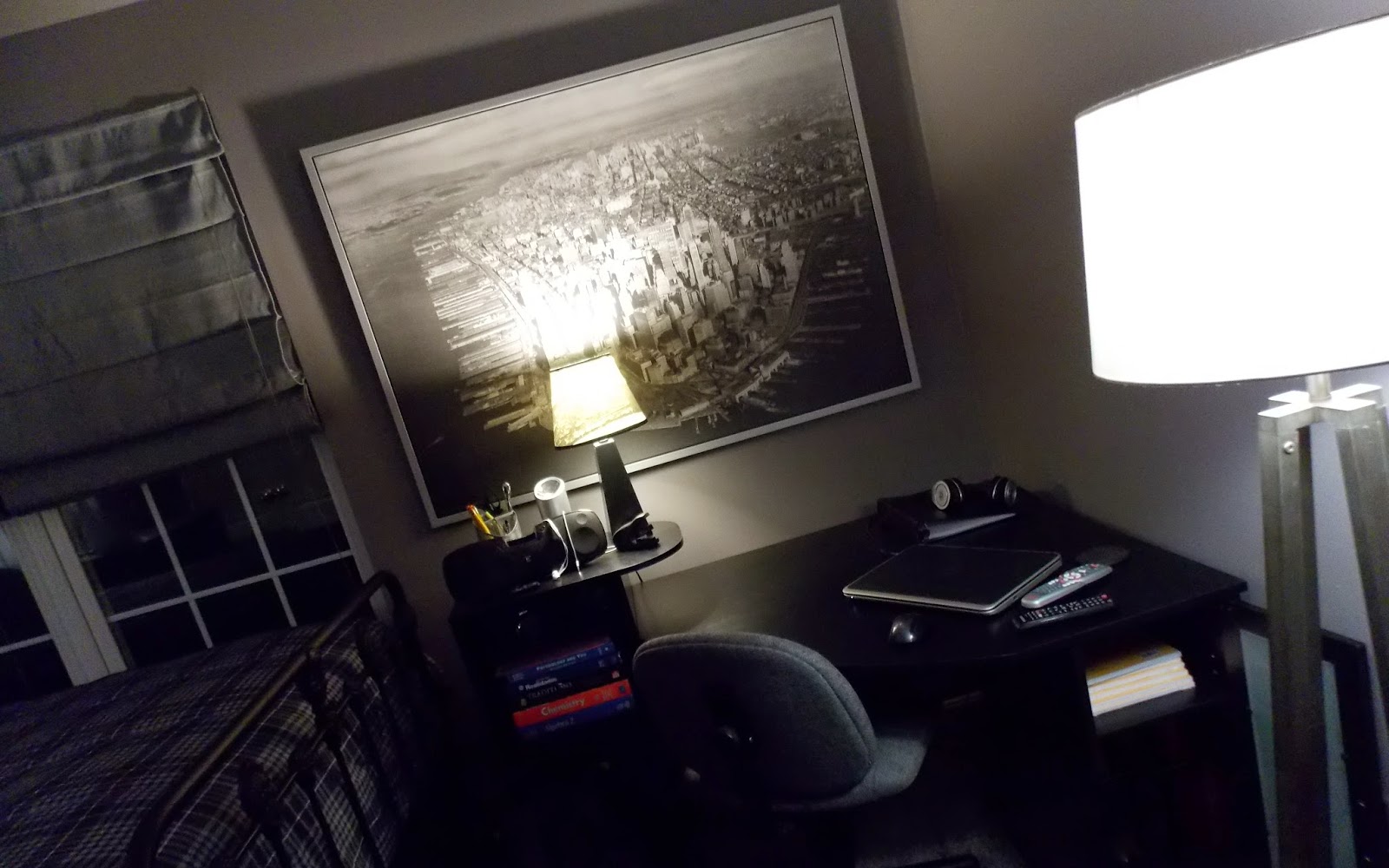 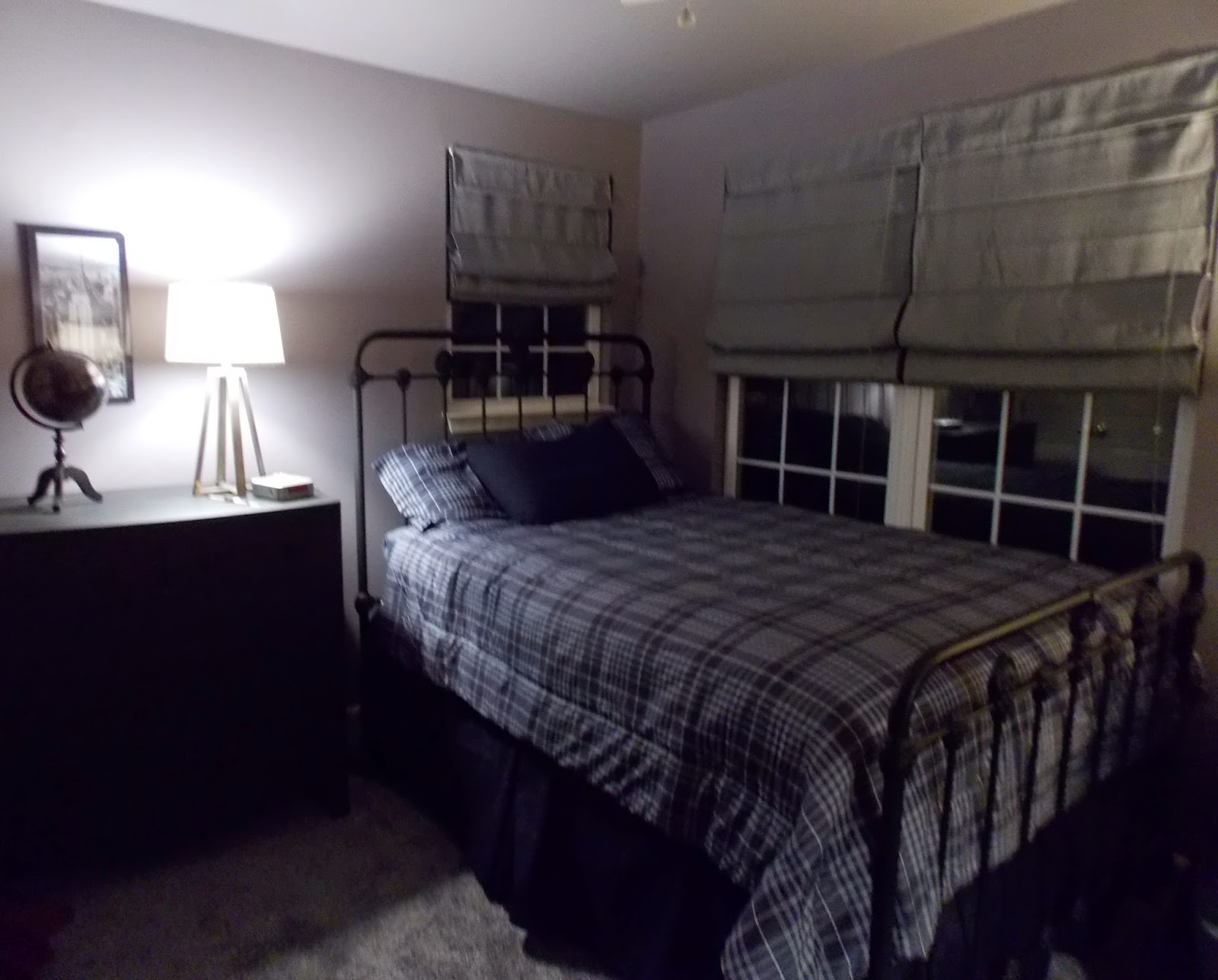 Posted by Doojies at 5:49 PM No comments:

Anyone want to venture a guess as to where I'm going? Yep.

This is our second annual hometown reunion and I'm hosting about 100 people who love to get together and talk old times and meet new folks from our own hometown, Bryan/College Station.

It's been five long months since I've seen home and, especially considering it's winter on the east coast, it's way overdue. Photos of the fun when I return. Until then Via con Dios Amigos.

Before and After While During~An Update

So, week whatever and still working on "the big project" of trading my work space with Matt's new bedroom (details in previous post). Below is Matt's old room and my new work room freshly cleared and painted. Above is the room with just two pieces in it. It would be wonderful if this was the amount of space and the openness I had to work in but alas it isn't. At all. It's now jammed and has been set aside until I finish Matt's room and can get back to it. Photos later (hence, the title part "During").

Above and below are the same room, same angle, all changed. (Note the snow outside above and the green trees outside below; this is how some of us keep from going too crazy during winter...or is it more crazy?...)

Above and below are all the pieces of the desk that I ordered for Matt online. The box was so heavy that the delivery guy could barely get it in the house. Matt carried each of the heavy 40 something pieces up to his new room where we spent the next three hours assembling it while listening to the soundtrack from American Hustle (I highly recommend it).

It's great that Matt's now at the age where he can help me with these projects. He helped me paint these walls charcoal gray and helped me haul my childhood bed up from the basement after I'd painted it matte black. Of course he's got good incentive since it means his room will be finished faster. But he did plenty to help me with my room, also making the process go faster but, heck, it was still help which is new to me.

Above, voila!, one corner of one room finished. Oh, and note the new carpet. The 17 year old off white carpet had been totally ruined long ago and I'd been using throw rugs over it to cover most of the damage. Below is what the same corner used to look like when things were still well organized as my studio.

Stay tuned. I'm hoping this will be finished by the end of the week. Wish me luck.
Posted by Doojies at 10:19 PM 1 comment:

Passe' Smasse' or why I still blog

The reason I still blog, even though I guess it's so last decade, is that I want to have all this history for myself. As I've said many times before, I've never had a diary or a journal but I've had this blog for many years now and I'm so glad I do. As you can see, if you look long enough, I go months at a time where I don't blog but eventually I make my way back here. This time it's to update on a big project I'm taking on and I want it documented.

This was the latest incarnation of Matt's bedroom. Several years ago I shamelessly conned him into taking the smallest bedroom by letting him pick out the bright turquoise paint and new furniture. We did this a couple of years ago; the sleek New York City-themed look. Minus the Bogie pillow-Matt nixed that right away.

Well, he'd been a good sport about it but that ended. It's the smallest bedroom and it's hot as all get-out, squeezed between two other bedrooms with the sun beating down on it most of the day. During the summer it requires a window unit a.c. And he's just outgrown it; he needs more space, a desk, a chair, room to move around. Not too much to ask.

And here's how the second largest bedroom looked as I use it for my art studio. Shamelessly.

This is one of my published pieces, FYI.

Nice, right? On a day when all had been tidied up so I could find things so I could create.

And here it is now. Okay, it's this bad because I had to move Matt in yet another bedroom, move that stuff into my studio to clear out Matt's room so I can paint it and move my things in. Then I have to paint this room, paint furniture, replace the carpet, and move him into it. Yes, I have procrastinated on this project since I said I would do it last summer, but the time has come. It was on his Christmas wish list and he has been helping me. It's a big undertaking but it feels good having started the transition because I don't quit a project until it's finished. I'm blessed to be that way. Stay tuned...it could take a while even though I work fast and hard.
Posted by Doojies at 9:47 PM No comments:

Doojies My Life of Ironing