Not quite ready for prime time... 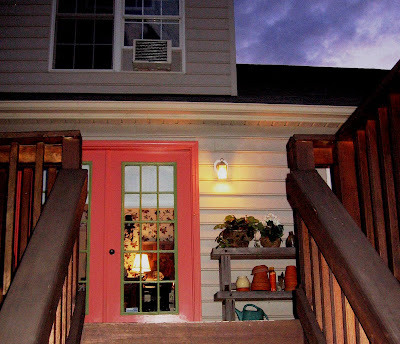 I never (never say never) try to do two projects at the same time but I hate this workroom re-hab so badly that I started a long-overdue project of painting the back door that goes out onto our deck. It's always been just off-white trim color and our deck's never had much pop except for the flowers I put out in spring. This year I didn't want to do too many flowers; I didn't want to have to constantly keep up with watering so I've used other means of decor color. 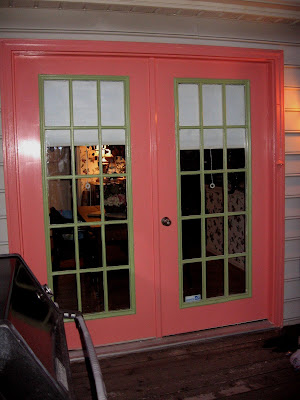 Sooooooooooo, since I had the original "coral" paint from the first try on the front door, I decided to perk up the back door with that color. Then I got really inspired and decided to trim it in the same green as the front porch shutters. I like it. I "finished" it last night. Taking the both sets of grids off means that the glass in between eventually falls out. The first set was before Paul came home and I caught the glass from the outside as it was falling through into the inside. Voila! for my first trick. I waited for Paul to do the second side while the dark clouds are rolling in. I thought myself quite the clever he-woman; taking both sets of grids off and painting both sets, the inside set being in great need of freshening. AND it means I can clean window sans grids so they get nice and clean. I basically broke apart into three pieces the first outside grid getting it off but did much better on the second set because I was more careful and had help. After painting all and drying the first set went back together easily. The second door, not so much. We looked like two drunken idiots trying this and that to get it together. The low point was when the glass fell onto me and knocked me to the floor with the power drill whirling away in my hand and the window laying on me. Many times during this process I kept thinking of all those shows I've been watching in the background on DIY (I'd do better on the DUI channel-just kidding) thinking, "I can do that.", but now I realize I'm not quite ready for my own show as we took turns catching the falling 2/3" window through the hole in the door. In the end we went with half assed and a prayer and called it finished. Looks good, no? Adds a nice pop to an otherwise blah background. And pop it could, if a nice breeze comes through and hits that loose glass side. 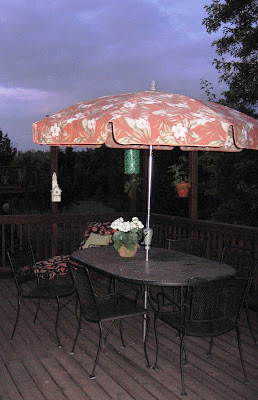 Got a new umbrella and chaise cushion plus throw pillows for the chairs and it's another outdoor room. We have been using our front porch for that a lot lately, now we have two extra living spaces. Sweat equity, baby. 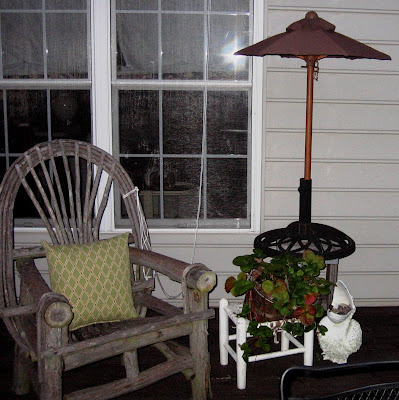 This is the basement door which shows how the upper door looked like before. Pre-painting ambition plans included doing this door too (it's Art's entry), but I'll wait for recovery. This project made the re-hab seem like a cake walk. After Bahamas at the earliest.
Posted by Doojies at 11:32 AM

I feel like I overuse the word amazing when I comment on your blog - but your door is amazing! And so are you! xo-Mellie