This is so random...how random is it...? Okay, I'm not doing the Johnny Carson/Ed McMann thing again...it's just random. I was sitting on my porch today pondering...perhaps I need a new hobby or a JOB-Border's, will you call me already?...pondering my love life. That might seem strange for someone my age who's been married 13 years on the second go-round but, as I said, it's random. Actually I've been experiencing a little "bored housewife syndrome" of late. It's not just that; I have my great friends and art and decorating in addition to the family, cooking, laundry, cleaning, etc. It's the last part, the labor, that's getting to me. You'd think after 28 years it would have gotten to me sooner but, hell, I'm so restless I feel like it's February in Casper, Wyoming. So, while my navel was being studied, for some reason I looked back over my love life. It occurred to me that here I am a Texas cowgirl through and through and there's never been a cowboy that didn't break my heart or at least leave a little dent or disappointment. I guess that's why this cradle Texas Episcopalian is married to a cradle New York City Jew. Not to mention that he's a scientist and I'm an artist; he's down and I'm up; I'm pretty fearless and he's got that Woody Allen neurotic thing going on. I scare the shit out of him with my quick decisions and thinking and wild ways. It takes him six months to buy a t-shirt when I could buy an island in a day. His Cosmo vs. my six pack of beer; his Diet Coke vs. my Red Bull mixed with Coke. I'm the one with the pickup and power tools. But I digress after all it was my PAST love life I was pondering. There's a pretty impressive list of cowboys to choose from. Don't get me wrong, I did some heartbreaking myself but I don't think they were cowboys. I believe that Randy was the worst and best. He was a professional bull rider sponsored by several big companies such as Winston-Reynolds. Oh my gawd; so handsome, such a gentleman, such a stud, treated me like a princess, and the boy was the best kisser I've ever know. I'm talking weak-kneed. We dated for quite a while then he said he had to go back out on the circuit and he'd be back in about two months. I counted the minutes...this was way before cell phones and he was in some remote places. Well he finally called me...two YEARS later...the week before I married my first husband and said if I'd call the wedding off he'd come straight over and marry me that day. 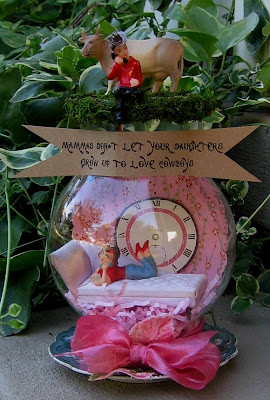 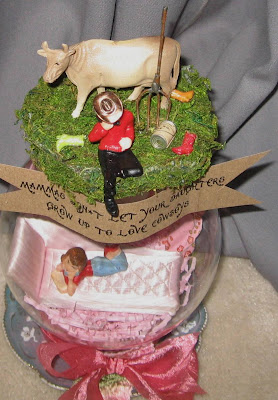 Sooooooo, pondering all this today, after mowing the lawn, thinking I was in a "bored housewife" mood, I was inspired to get my pouty butt up and back in my studio and make the above little piece. Poor unsuspecting, naive Darla is gleefully talking to her cowboy boyfriend on her chaise lounge from the confines of her room-the bubble (glass lantern) she thinks keeps her protected but actually keeps her prisoner while Festis is free to come and go and string her along and play with his cows and horses and cowgirls whenever he freaking feels like it. Hence the advise tag title, "Mammas Don't Let Your Daughters Grow Up to Love Cowboys". If I wanted to cover all the bases, which I thought would ruin the artistic integrity, shit, I woulda added, "date, greet, meet, get anywhere near a cowboy". Getting jaded, I like to think that pioneer woman and her Marlboro man is all just fiction...what do y'all think? 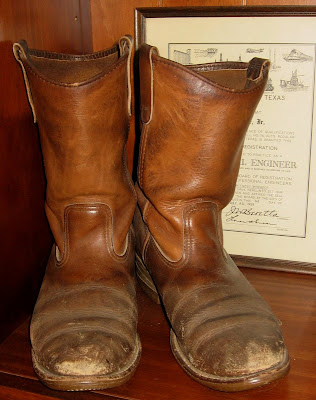 I was raised with unrealistic expectations of cowboys. My daddy was a cowboy and he was a very fine, honest, decent, ethical man through and through; he said what he meant and meant what he said, rare these days, been rare for a while, I guess. Brave and strong and true, and handsome to boot (puns are always intended) and impossible to fill. But, as I said, all these were just random thoughts... 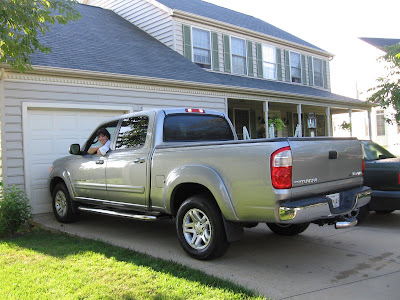 I love your random thoughts--and then how you manage to turn them into art-not to mention you had all the right stuff to make your thoughts into art--well, I just think it's genius!!
You and your husband sound like quite a pair--I bet you make his life so much fun and he knows he's got a good thing!!
Too bad for the other guys..;-)
Was it Patsy Cline who sang "Who's Sorry Now"?

Well said...please make the husband read this...so he can get inside your head and really "hear" you. Because even if you have said this all to him before...their ears only hear "waaawaaawaa."

And I had a "Randy" too....and those daydreams of him get me through the mundaneness of chores.

I feel EXACTLY the same way! I really want to get a job, and I'm hoping to get one at Barnes and Noble- the perfect job!!

And don't those cowboys smell good, fit their Wranglers and Levi's in all the right places, and are so polite even when they're breaking your heart! I'm right there with ya sister!

I love when you write stuff about Gramps. I'm so lucky to have had such an amazing grandfather.