Who in the world would have guessed that they have football in Maryland? I guess I did know; I've watched enough Ravens games with Justin, washed enough Ravens jerseys for Justin, have a friend who is a former super star football player from University of Maryland, and I did grow up knowing about the Colts. Actually, normally very unlike me, I'm exaggerating a bit. A few years ago when the Ravens played the Colts here I wore purple all day. And I really appreciated Justin's hometown outlook on sports being all Ravens and Orioles. But I don't think that anyone does football like Texas, still don't, Nebraska being a close second. How many times have I told the story that the doctor swore my Nebraska born and Uof N alumn, Texas transplant in her 30's, 92-year-old grandmother lived through New Year's eve and passed away on January 1st just so she could watch Nebraska play their bowl game. And I still haven't given up on my childhood dream of being a professional quarterback when I grow up. Hey if Brett Farve... 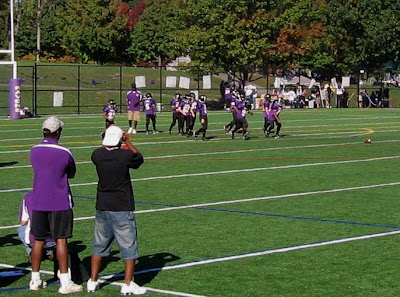 Okay, I think you've got my perspective down now and I'll say they do football here pretty well. My youngest of 4 "adopted" sons, Alec, 9, started football this year and, luckily, he's on the Ravens! Daddy is one of the coaches as is big brother Andre'. 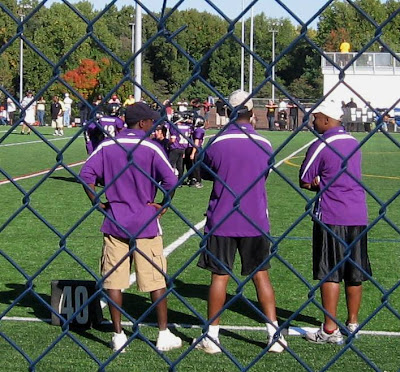 I'm not sure why we'd procrastinated about seeing a game...Matt's not into team sports...he's being forced to take Karate finally...but we just hadn't made that step to see one of Alec's games. Yesterday Alec made it clear to us that he was disappointed that we'd never come, so we did it and it was great. They do it up so professionally. The area where they play has several fields and all the local teams, divided by age, are Ravens and it's a sea of supportive purple. Daddy is the one on the left, above. 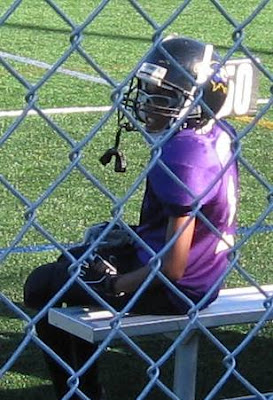 Here's "our" Alec. He weighs about 20 pounds (slight exaggeration), plays defense and does a great job doing it. 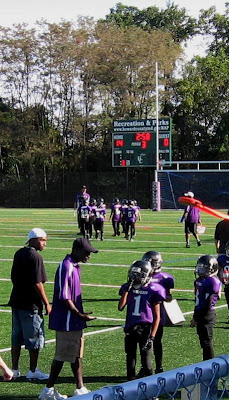 Alec getting a little encouragement from Daddy.

Did I mention the ASTROTURF!!!!!??? Or the whole, new nice area with bleachers, announcers, music, electric score board, concessions, the works? 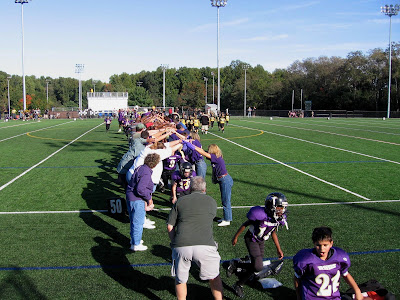 But the coolest thing was at the end after the Ravens won, of course. All the team parents and supporters go out on the field and form a winners tunnel that the players run through. Even the hardest critic, Matt, said he wants to go to the games every week now. Good, 'cause so do I.
Posted by Doojies at 12:32 PM