Now I really can't complain...or can I? (pondering by rubbing my chin)

I know I complain a lot that I'm not living in Texas and that the folks here don't make eye contact unless you know them, but then something like today happens and, karma, my negativity is proven wrong.  My 91 year old father-in-law, in a confused state, called 911 at 2 this morning.  At 3 a.m., while Paul was, by that time, with his dad, the doorbell rang.  When I answered it was a Howard County police officer and he had walked down our long street and several blocks before that in hip-deep in snow.  Since I'm in charge of the neighborhood watch, I was inundated with emails regarding when the hell we were going to get our three culs-de-sac plowed.  I mentioned that the police had walked in to check on my father-in-law and the neighbors were so concerned that they all got out today and shovelled out OUR ENTIRE STREET.  Of course it benefits all of us but the initial motivation had been my father-in-law's well-being.  I still can't think about it without tearing up.  We have a pretty close neighborhood as far as the adults are concerned, and we do look out for each other, but this was a clear-cut example of the kindness of human nature. 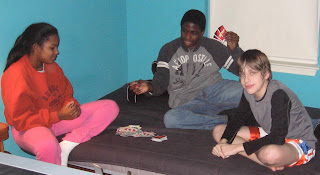 Here's Matt, Alana, and Ohmad after they had made their contribution to the shovelling outside.  They're playing Uno,.. 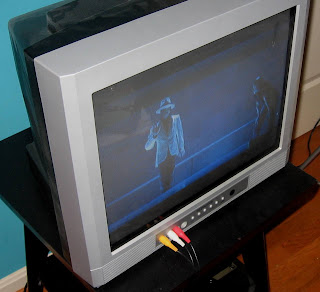 ...watching MJ on the vidie (I still can't watch it without crying but once he's on I can't stop watching him; I just become mesmerized), and... 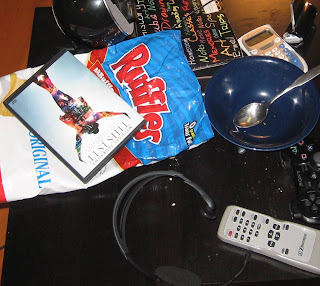 ...and all the emergency supplies that teenagers could possibly need.  P.S. They are calling for ANOTHER FOOT of snow tomorrow and Wednesday.  Oy.
Posted by Doojies at 10:35 PM