Oh boy, today was THE day. I finally got to put up not only the Christmas tree but also the other decorations I'd been planning for so long. This is "my" year to decorate for Christmas. The boys and I alternate years to decorate. I've known what I was going to do ever since the summer when I was part of the Jewels of the Sea swap. I decided to do a swap tree. For those of you who don't know the swap deal, it's where someone comes up with an idea for artists, invites them to participate, then everyone makes a piece with the idea theme. Some swaps are one on one, some are make one for every participant. Well, if you recall, I signed up for 8 swaps at Silver Bella! Way too many, not just work wise (that too though) but also I didn't feel that the quality of what I made matched what I received because I was too overwhelmed. In any case I had A LOT of fabulous swap items from SB plus from Jewels of the Sea plus even from SB last year. So I got a pre-lighted white tree, put on the heirloom and vintage ornaments that were white and off white and then went to town with all the gorgeous art. I'm QUITE happy! 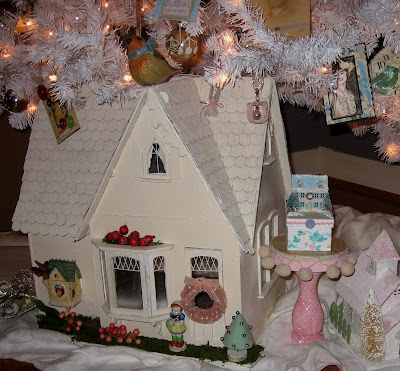 I purchased this doll house from one of our shops at The Pink Cabbage. It was already white but with a brown roof so I sprayed it all off white today and glue-gunned the heck out of it with a bunch o' fun stuff. The guys were gracious about it but I could tell their manhood was shrivelling as they took it all in...tough nuts...it's MY year. Next to it is the little glitter cottage I received from Alana George sitting on the pedestal that Lonnie Jenck made for the cupcake she gave me (the cupcake is still out in the kitchen just not on its pedestal at the moment). 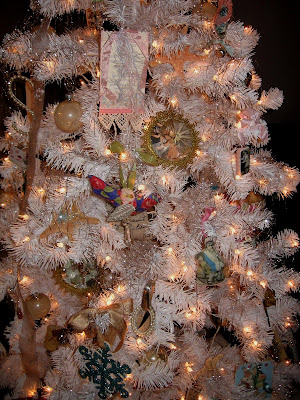 I hope that you can click on the photos to get close-ups. If you don't see a swap item you gave me chances are I'm using it somewhere else and I'm going to get to that in my next post, whenever that is. I'm using or displaying every item I received this and last year-so much goodness. 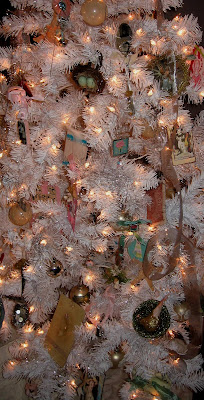 At another angle. It has taken a loooooooong time but the boys didn't even ask about the cupcake charms; they really have come a long way. 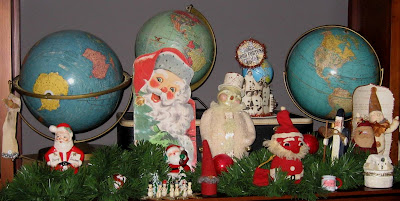 I did do some traditional decorating on top of our entertainment center; our collection of snowmen and Santas in greenery, the balance helped. 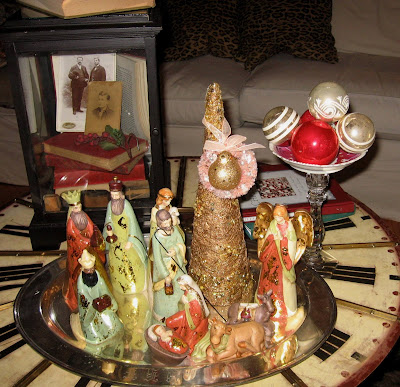 The beautiful nativity set I showed before plus the addition of a plate/candlestick I glued together holding some of the heirloom ornaments. 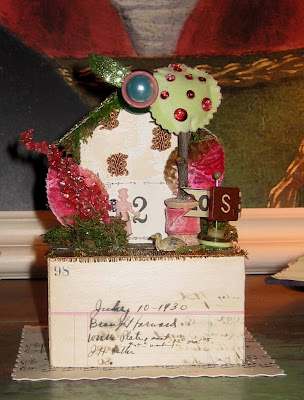 Coming in the front door here's the holiday house I made in Charlotte Lyons' class... ...two big ole balls on the chandelier from Bayberry Cove...

...and the vintage heirloom plastic reindeer and elves on the banister.

Outside Santa has taken the place of the flower pot in the swing and... 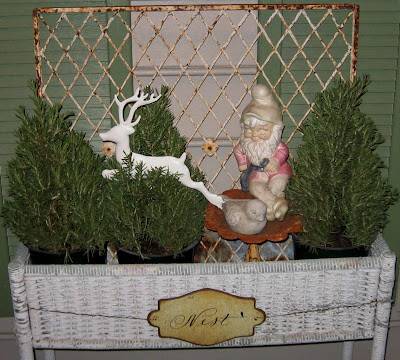 ...the gnome and reindeer share the planter with rosemary trees. I'm not one to decorate all the rooms in the house, just the family room, entry, and porch, so there you have it. I hope I didn't procrastinate so long that y'all lost all interest and also hope if you've not yet been inspired perhaps this will get you going. If not, you must not have attended Silver Bella and we'll just have to see you there next year. Let your hearts guide you through the reason for the season with blessings and gratitude.
Posted by Doojies at 9:37 PM

FABULOUS!!! Worth the wait! GREAT JOB!!
Merry Christmas to you!!
Blessings,
Myrna

Tina(Taken over by her daughter, Nicole) said...

I think you did a great job and the guys will just have to shlep around in the girly glittery goodness a couple more weeks..lol.

I am SO in love with your tree and all of the swap yumminess!!! Next year I definitely plan on being part of a swap or two......felt like I really missed out.

Thanks for the bella box love. You are too too sweet. Also, I would love to get together and practice soldering. I'm hoping Santa has read my blog and knows that I desperately want soldering goodies for Christmas!
Cammy

Oh Steph! Your holiday house is just sensational! I love all your special touches! You house from Charlottes class is so pretty!

Thank you, ladies, for your compliments; I am happy with the tree for the first time in a long time if ever. I think it's my best yet since it's mostly other artists "hands" that did it. And I could just look at it forever thinking of each sweet bella who made each sweet, beautiful addition. Anyone else out there have spoons on your trees?